From the Origins in Mesopotamia 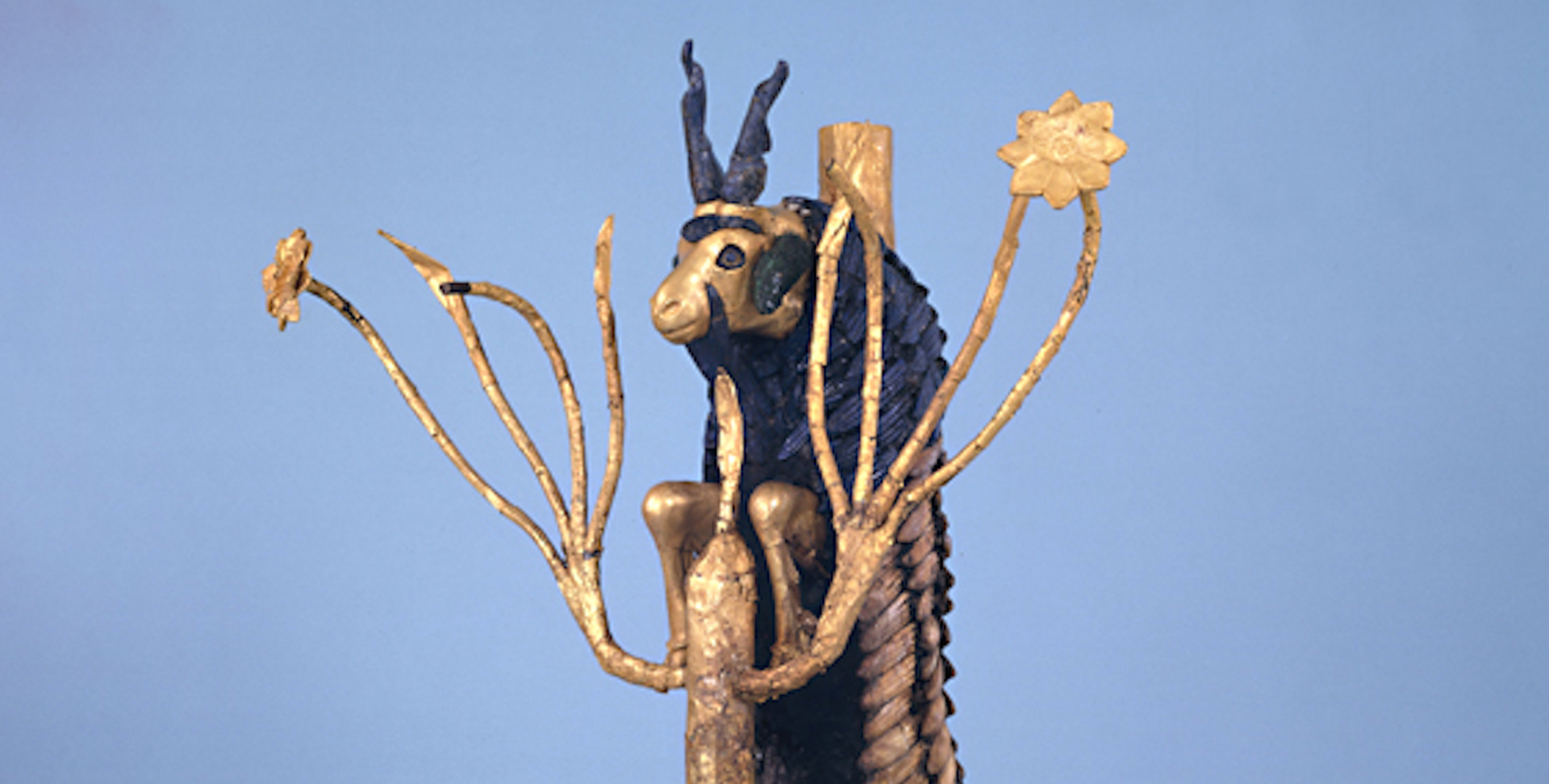 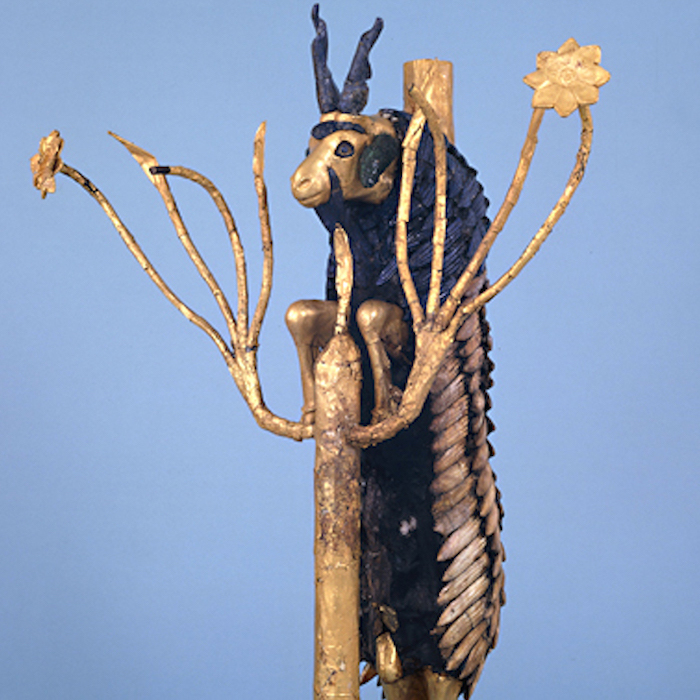 1
Mesopotamia
The entire ancient region of the Middle East is known as Mesopotamia.

This name means “country between two rivers” because it is literally located between the Tigris and Euphrates rivers.

It was here that humans invented agriculture, as you can see on this vase from Uruk. 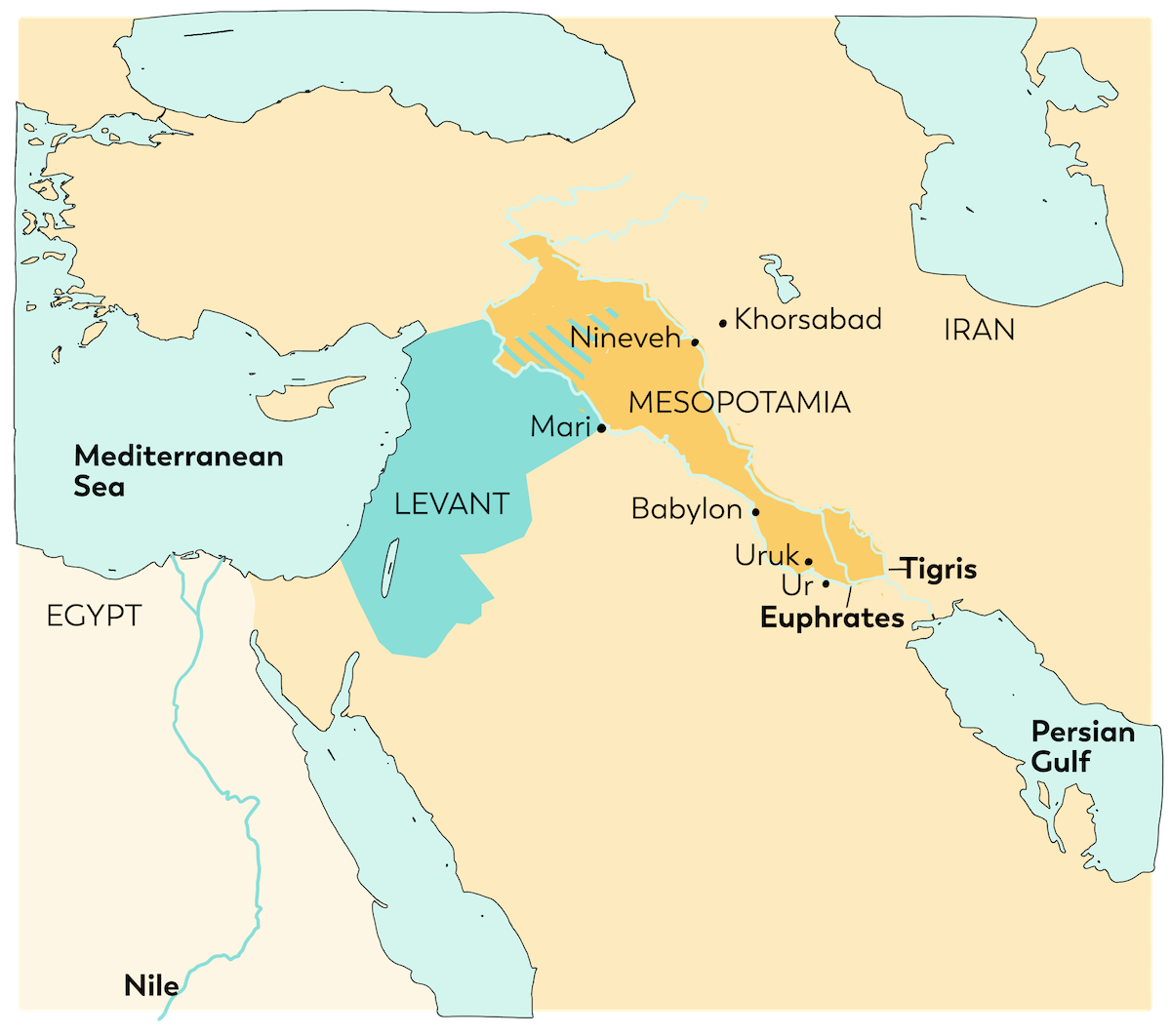 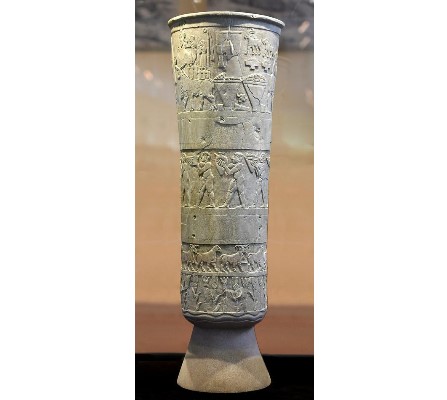 Many civilisations existed there in succession. If you want to discover them, come this way! 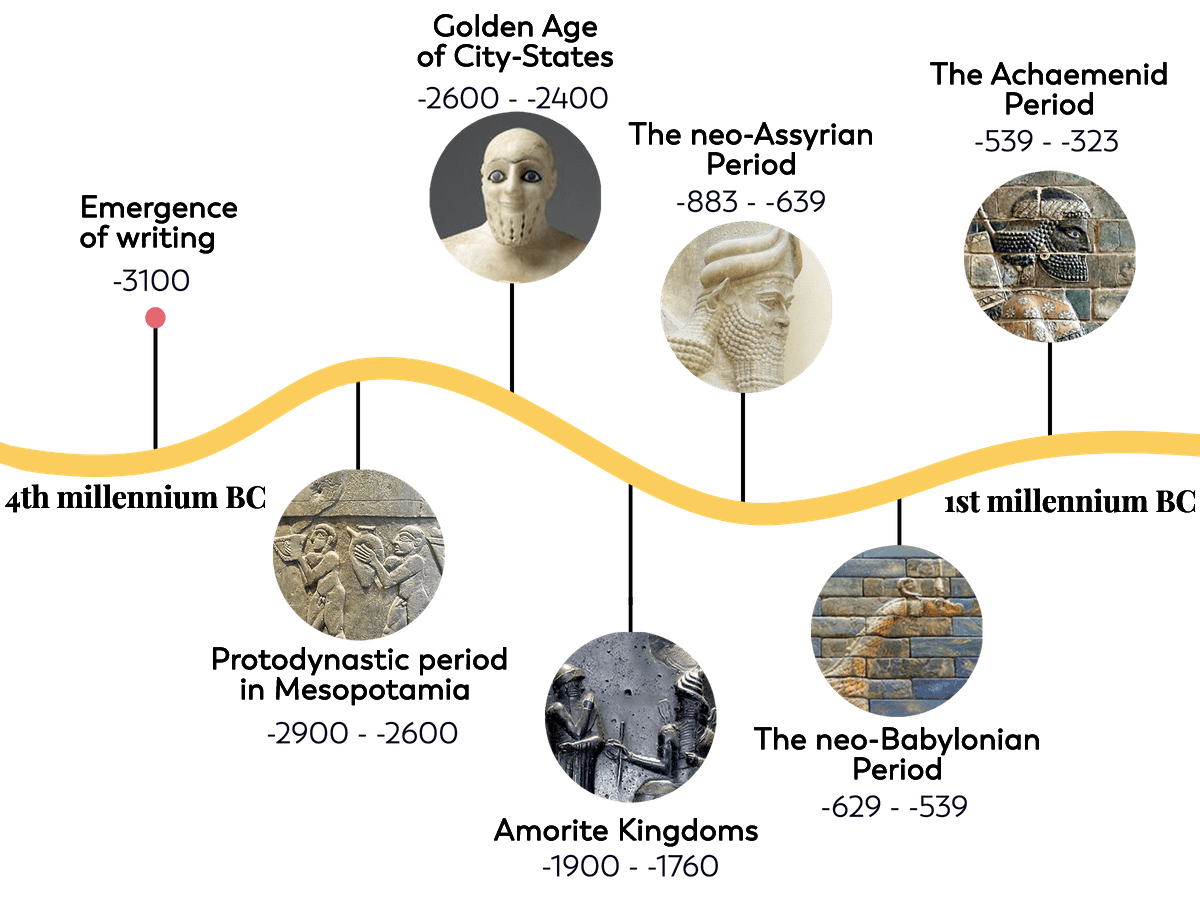 Mesopotamia, between the Tigris and Euphrates rivers, witnessed the birth of agriculture and the succession of many civilizations.

2
The birth of writing 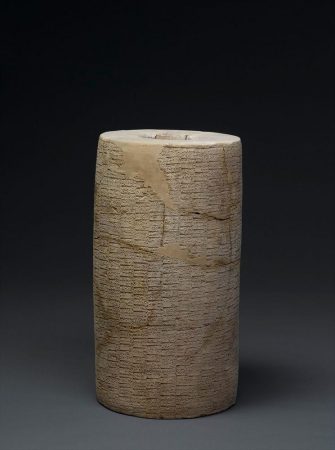 At the end of the fourth century BC, a major event was a turning point for humanity, the birth of writing. This marked the transition from Prehistory to History.

The system of writing that saw the light of day in Mesopotamia was called “cuneiform” because its signs were “shaped like coins”. Be careful, this is a spoiler: at the same time, hieroglyphics came to light in Egypt – we’ll tell this story later on!

Cuneiform remained the main writing system in Mesopotamia for several thousands of years.

Time to use your stylus! To write in cuneiform style, you need: 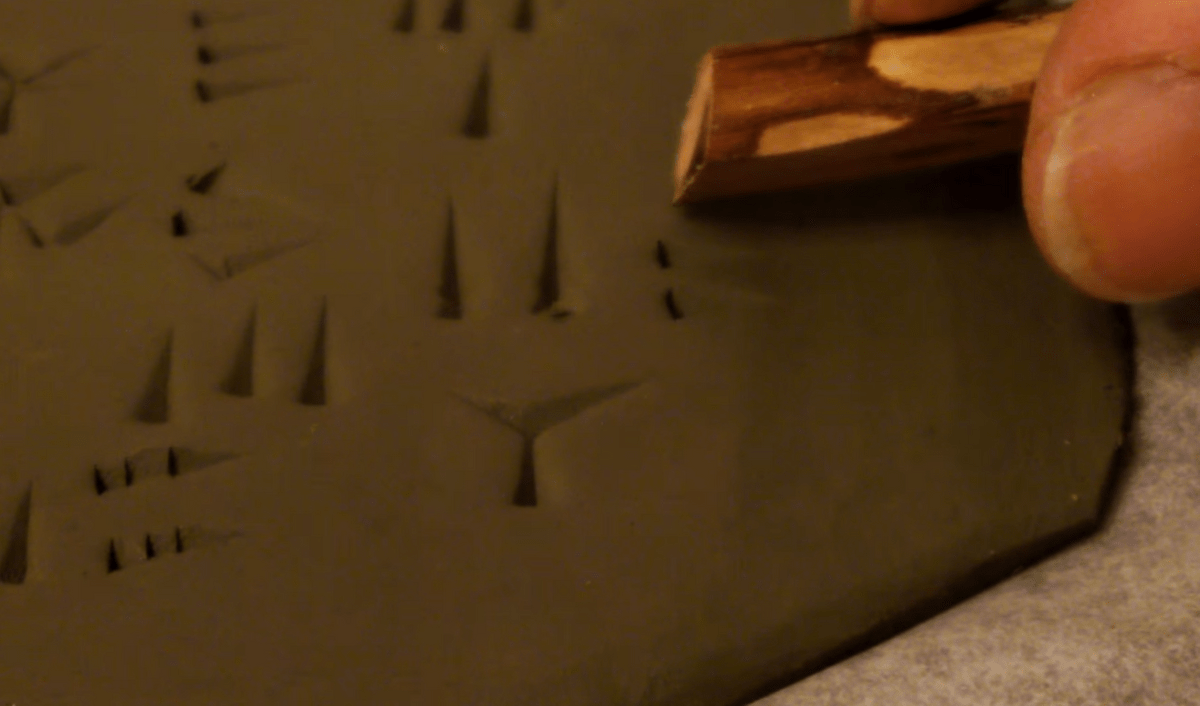 An example of Cuneiform writing
via the Pennamania channel, YouTube (screenshot)
In a nutshell

Towards 3100 BC, we moved from Prehistory into History, through the invention of writing, specifically in Mesopotamia.

3
The Epic of Gilgamesh

Now that writing existed, it was time to write humanity’s first fiction story: The Epic of Gilgamesh.

King Gilgamesh decided to set off on an adventurous journey. He got what he asked for: angry gods, ferocious monsters and even a flood … This story is, in fact, extremely close to the Biblical account, although it was written down several centuries later. Isn’t that surprising?

The name of the person who wrote the Epic of Gilgamesh rremains a mystery but we do know the name of the first poet to be known by humanity. It was a woman, and her name was Enheduanna! 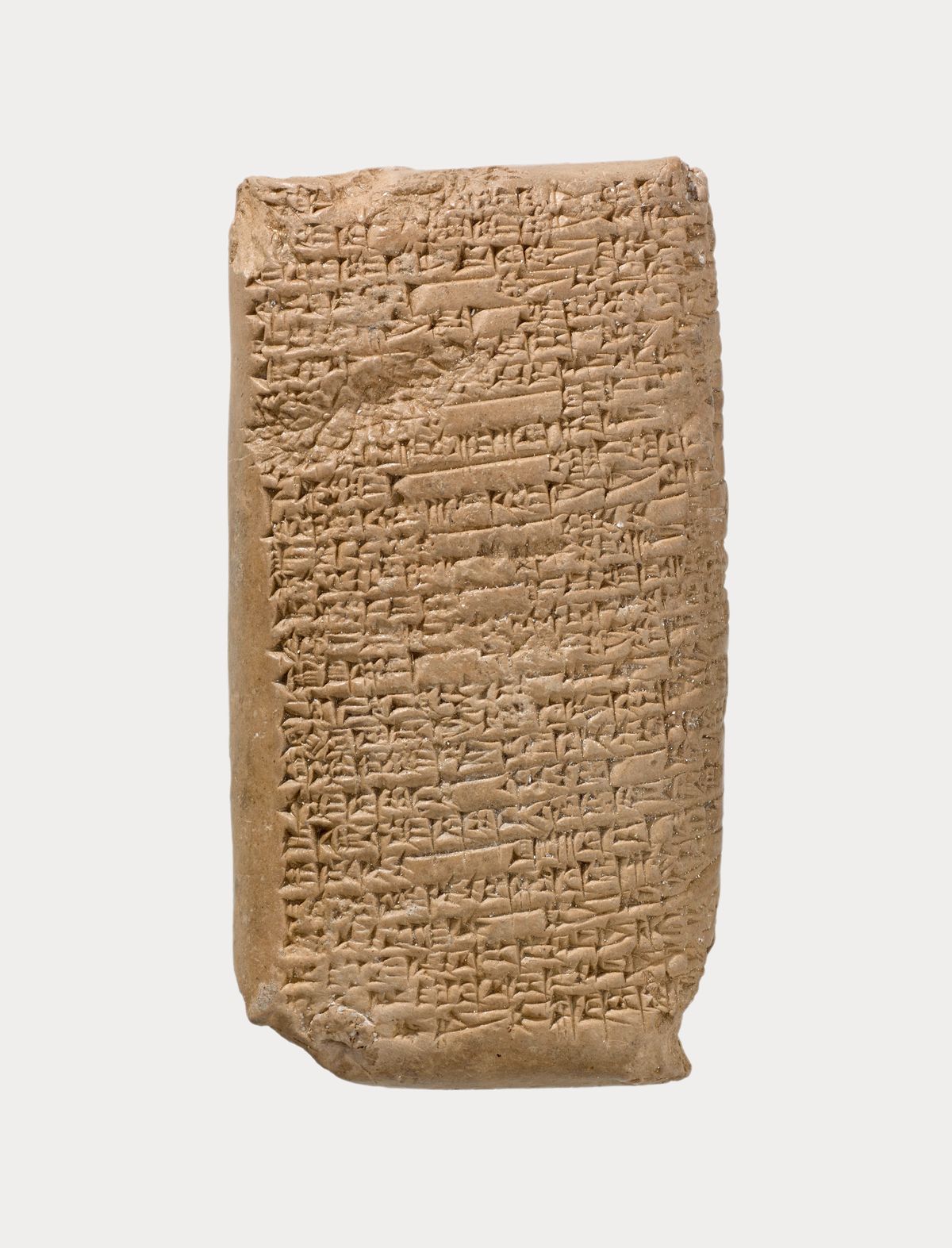 The Epic of Gilgamesh, the first known fictional account, may have inspired some Biblical passages.

4
The royal tombs of Ur

Let’s head for eastern Mesopotamia. That’s where we can find Sumer. We found out that it existed through the discovery of the Royal Cemetery of Ur, where we exhumed a great many bodies, known as “death companions” .

It was speculated that some people voluntarily drank poison to continue serving the monarch in death. By examining their skulls, it was discovered that others were forcibly killed by a blow to the head.

However, here we are going to explore the masterpieces that were discovered in the royal tombs. 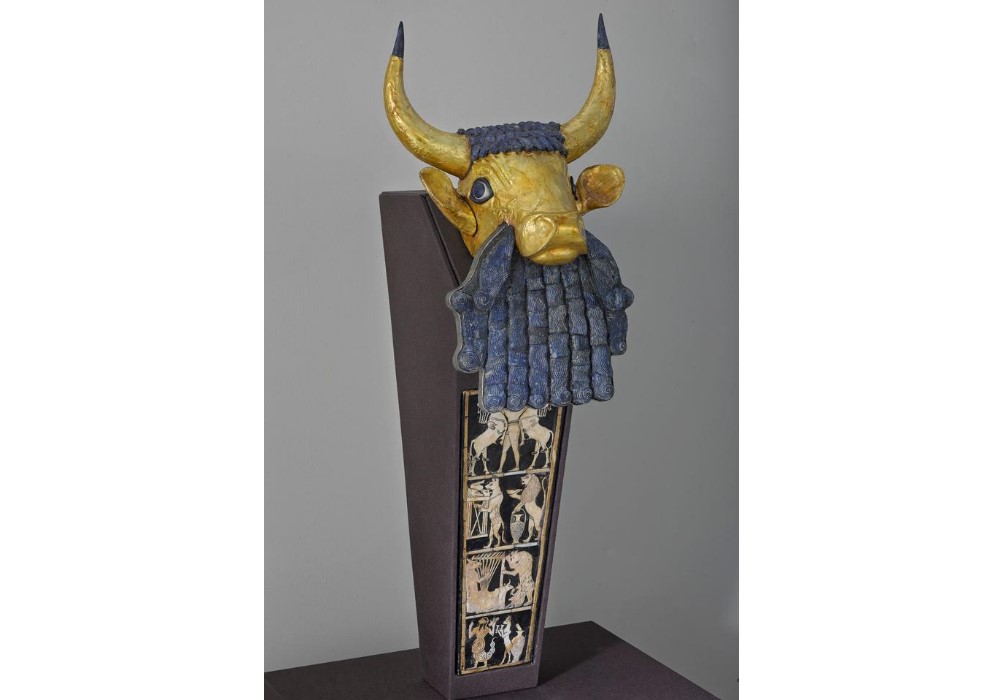 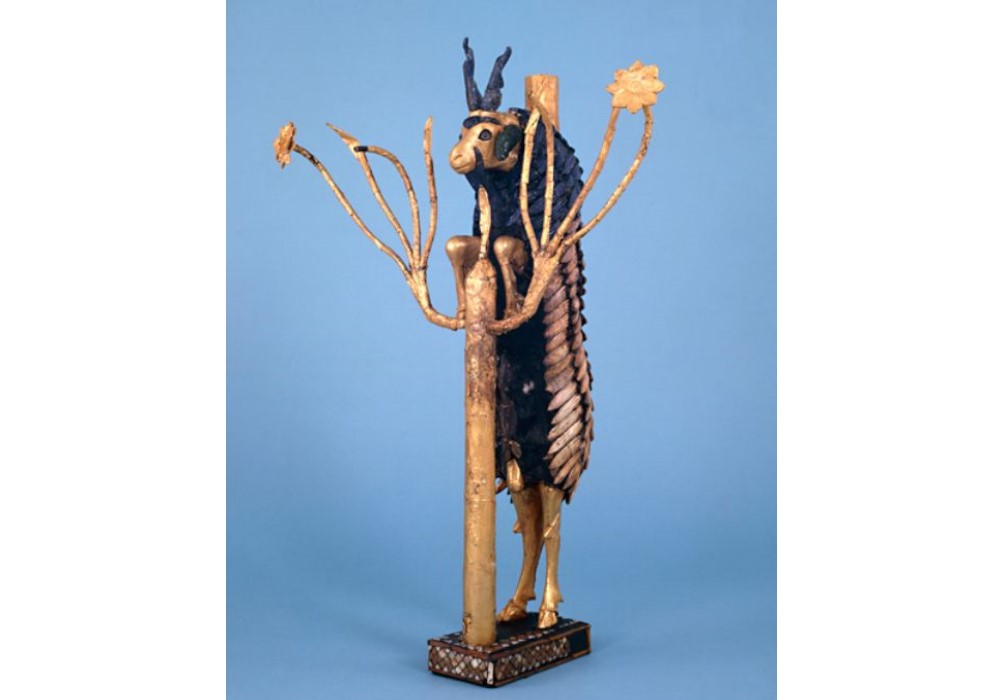 Great Ram from Ur,
gold, copper, lapis-lazuli, mother-of-pearl, silver, red chalk and bitumen, around 2600 BC, British Museum, London. Photo: © The Trustees of the British Museum 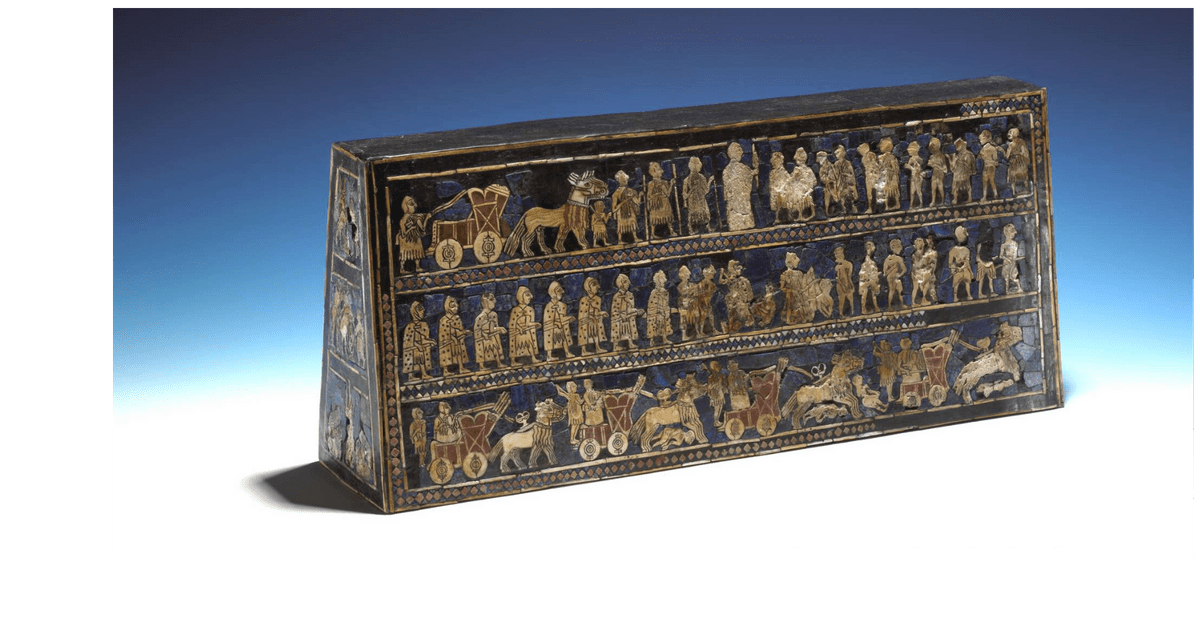 Standard from Ur
around 2600 BC, mother-of-pearl, lapis-lazuli, red chalk, bitumen, 8 x 18.5 inches, British Museum, London. Photo: © The Trustees of the British Museum

This sort of harp could have been used for addressing the storm god. It sounds like thunder when it is played.

This Great Ram is thought to have been used to carry offerings.

It is not known what this object was used for. The little characters are wearing kaunakes (skirts made out of long strands of wool).

The royal tombs of Ur in the eastern part of Mesopotamia contain masterpieces of sculpture and decoration. 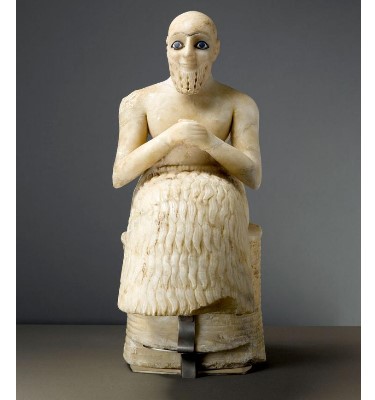 There goes the kaunakes skirt again! Who is that man with the beautiful blue eyes?

It’s a sculpture of Ebih-il, a powerful administrator of the king of Mari, a city located to the west of Mesopotamia. And its fleeting smile is a specific feature of art in this city.

Ebih-il probably worked in the Mari Palace. It was on this site that archaeologists discovered extraordinarily interesting remains. 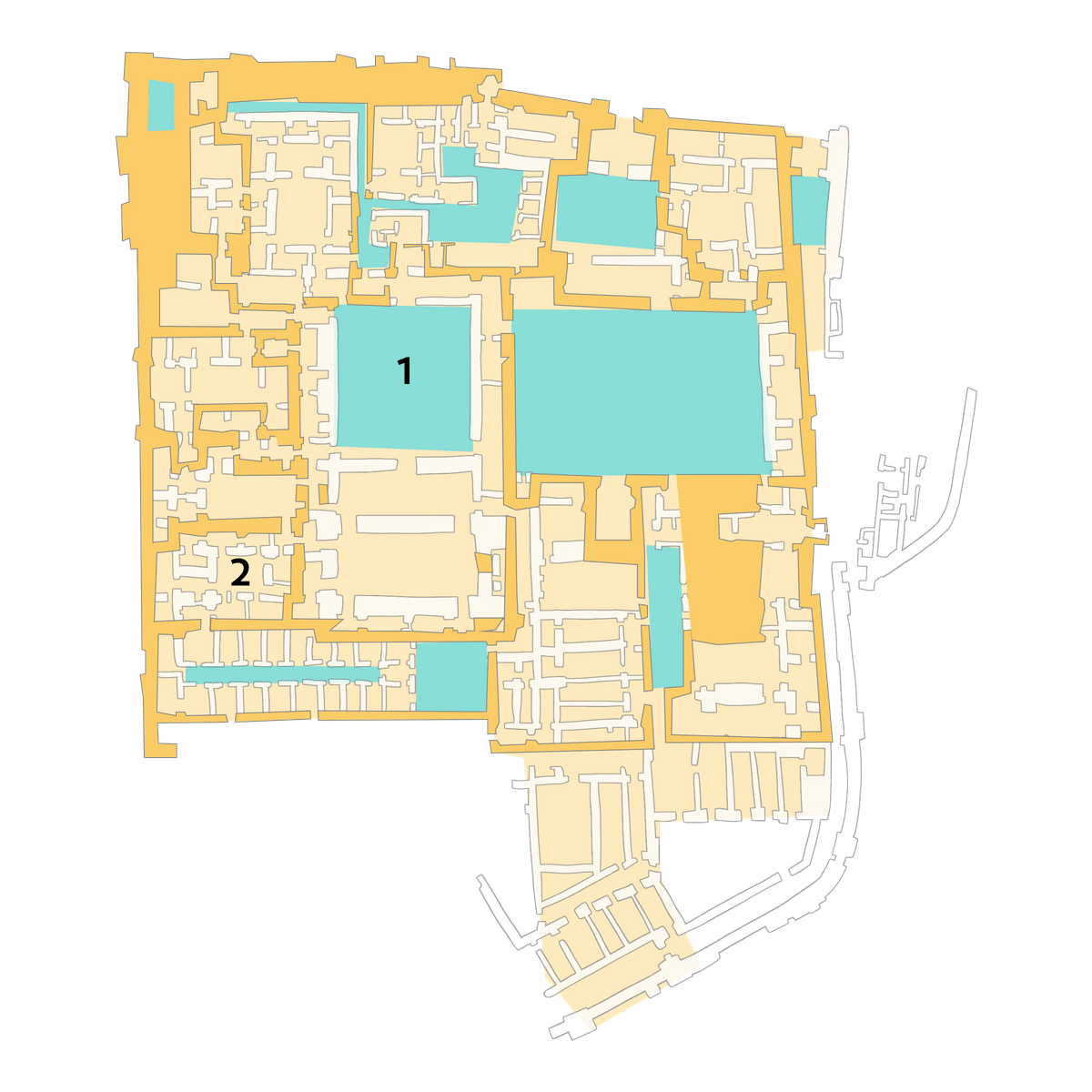 On the site of Mari in the western part of Mesopotamia, many remains have been discovered, including the statue of Ebih-il.

In Mesopotamia, no-one signed at the bottom of a page with a rough scribble. Instead, people used “cylinder seals.” Come this way for the guidebook: 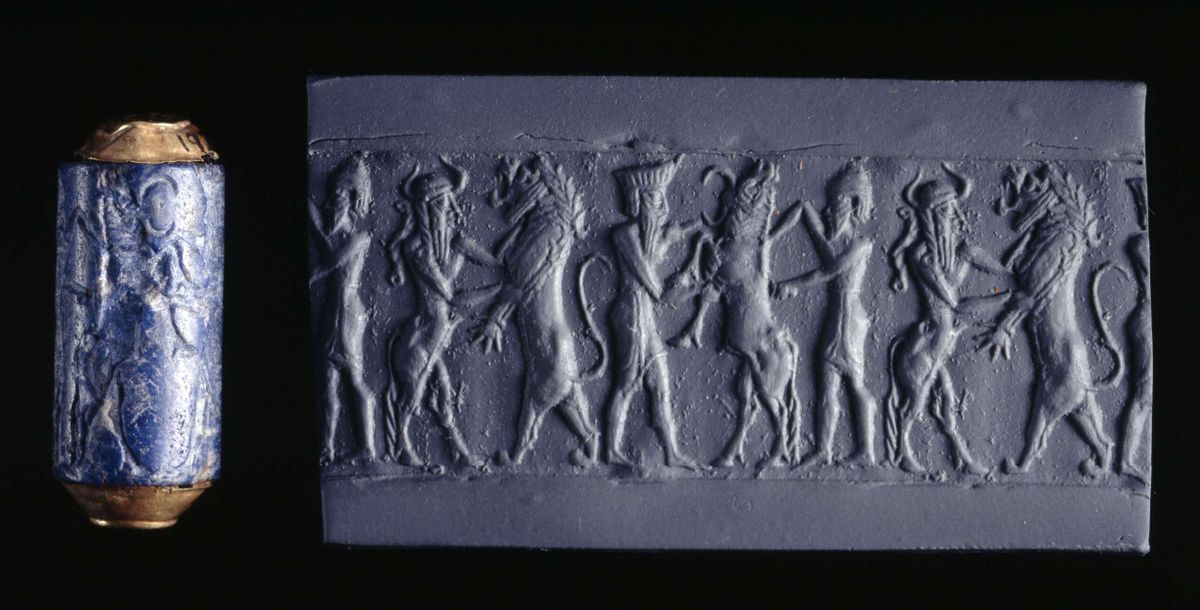 Cylinder Seal: minotaur fighting a lion,
3rd millennium BC, seal in lapis-lazuli and clay platelets, British Museum, London. Photo: © The Trustees of the British Museum
In a nutshell

Mesopotamians sign using a “cylinder seal”, an engraved cylindrical stone that was rolled onto fresh clay to print a pattern.

7
The Code of Hammurabi 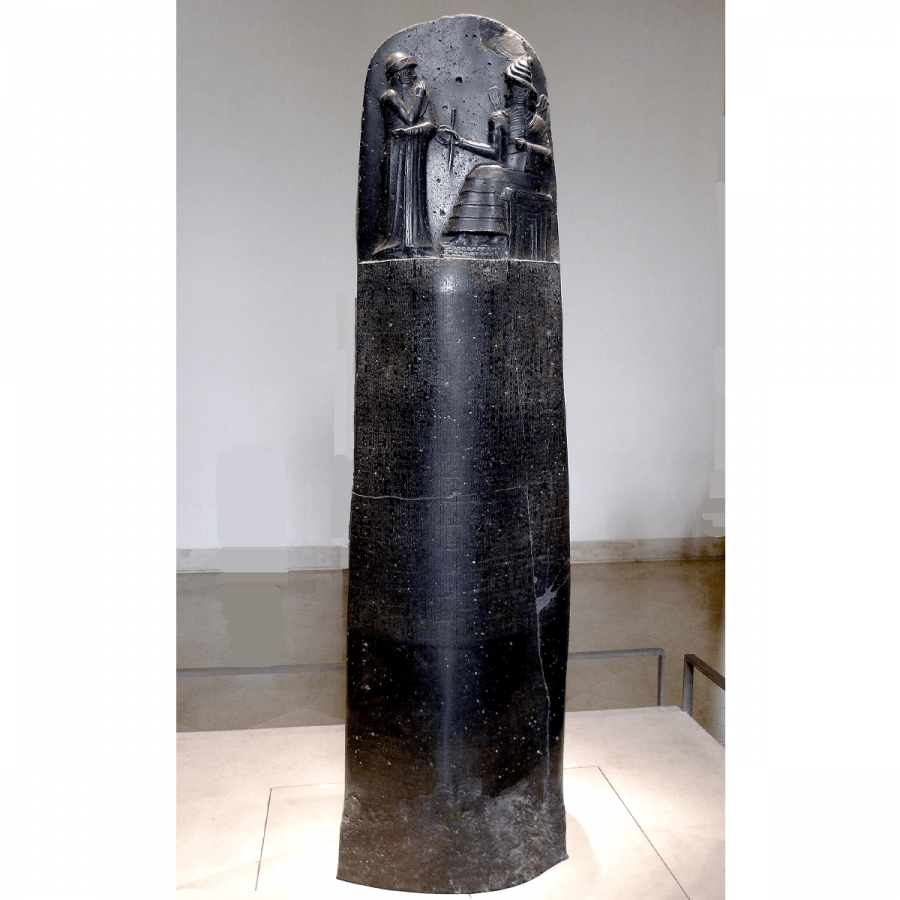 It’s time to get to know a king who made a lasting impression on the history of law: King Hammurabi of Babylon.

Here, the king is represented on a masterpiece to which the name Code of Hammurabi was given. Over 300 legal decisions are written on it, expressing the spirit of vengeance  “an eye for an eye, a tooth for a tooth.”

It is one of the oldest collections of laws in the history of humanity. 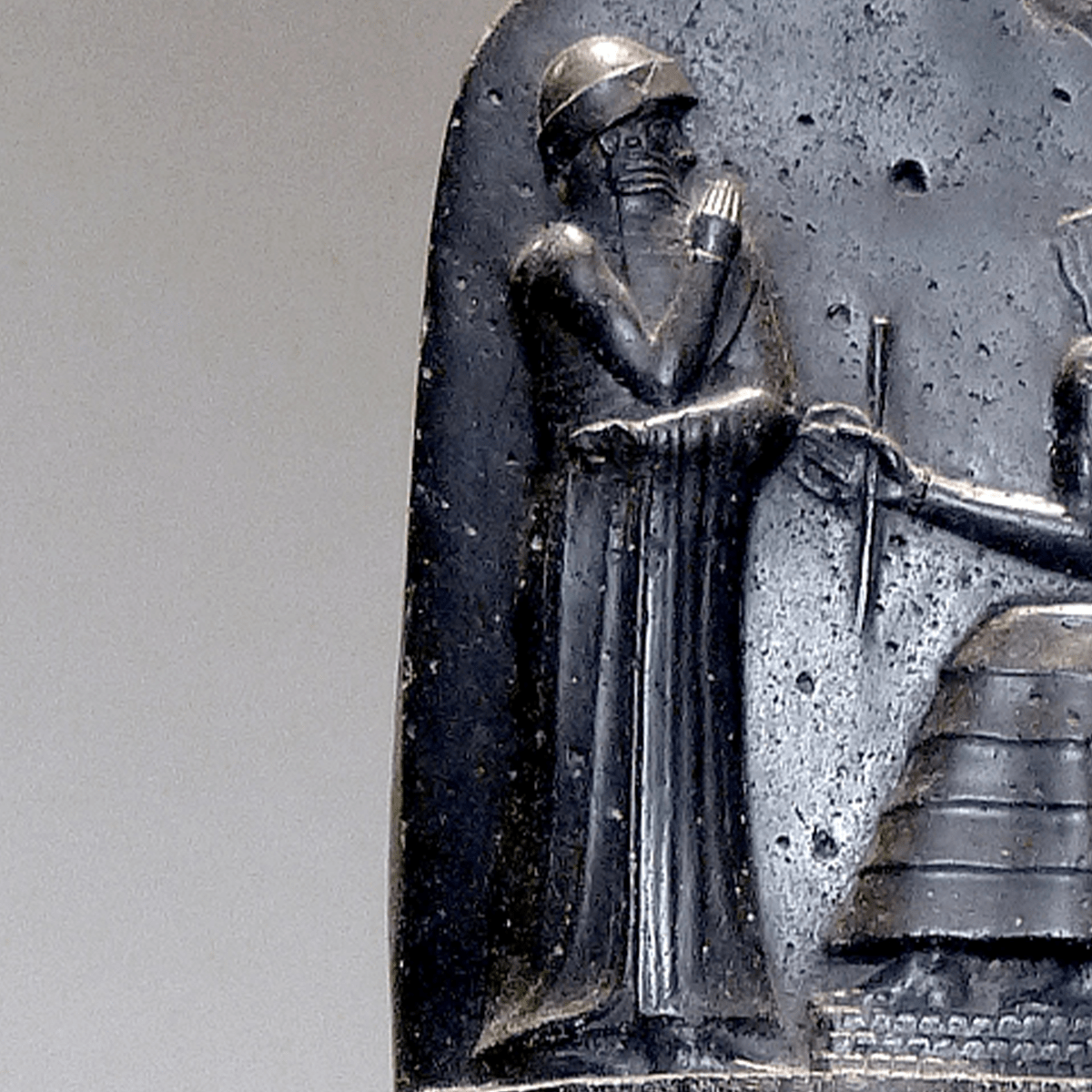 King Hammurabi:
Royal hat: round with a wide brim ; right hand raised as a sign of respect. 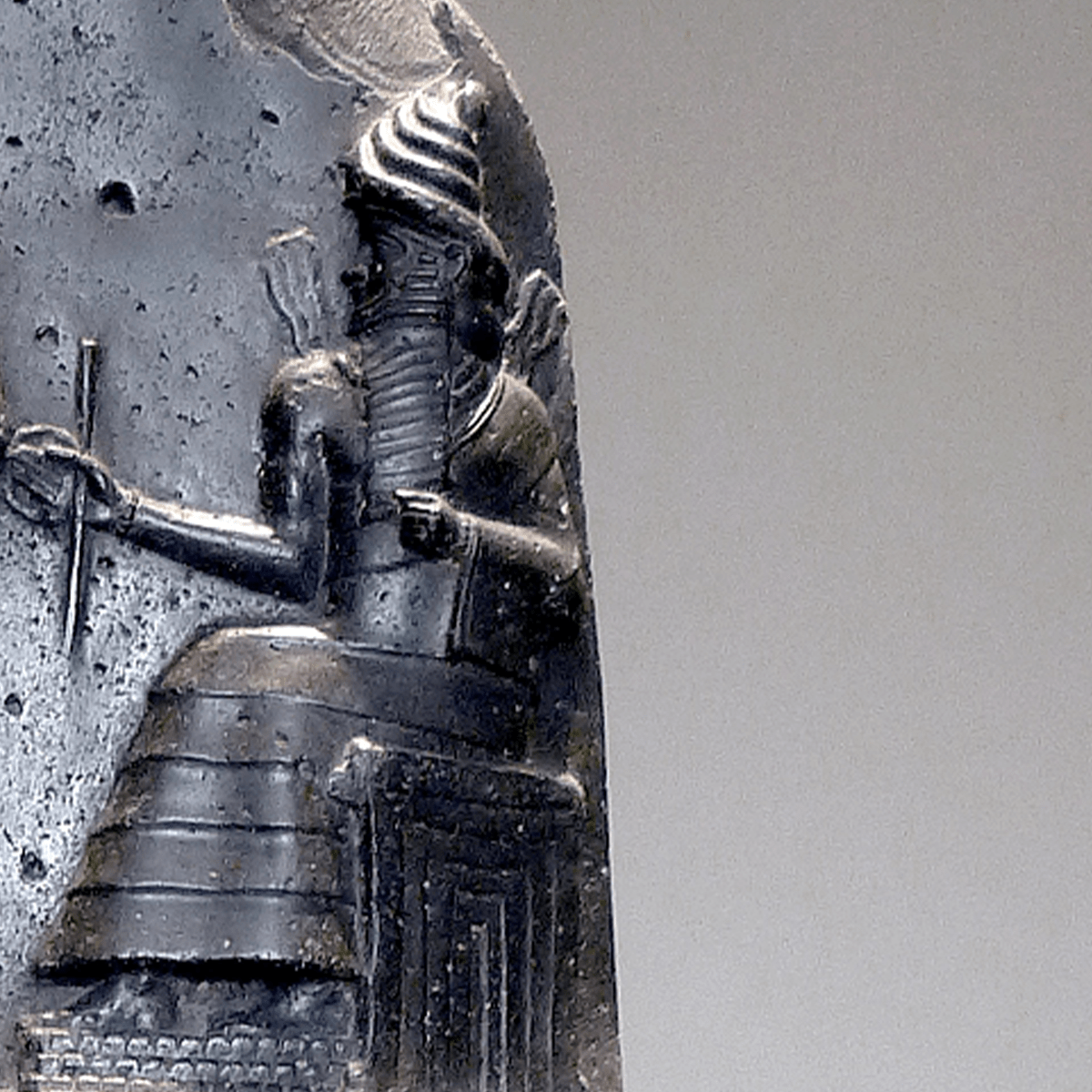 Shamash, god of the sun and justice:
Horned headdress ; flames emerging from his shoulders.
In a nutshell

The Code of Hammurabi is a collection of laws dating from the reign of the sovereign with the same name in the second century BC.