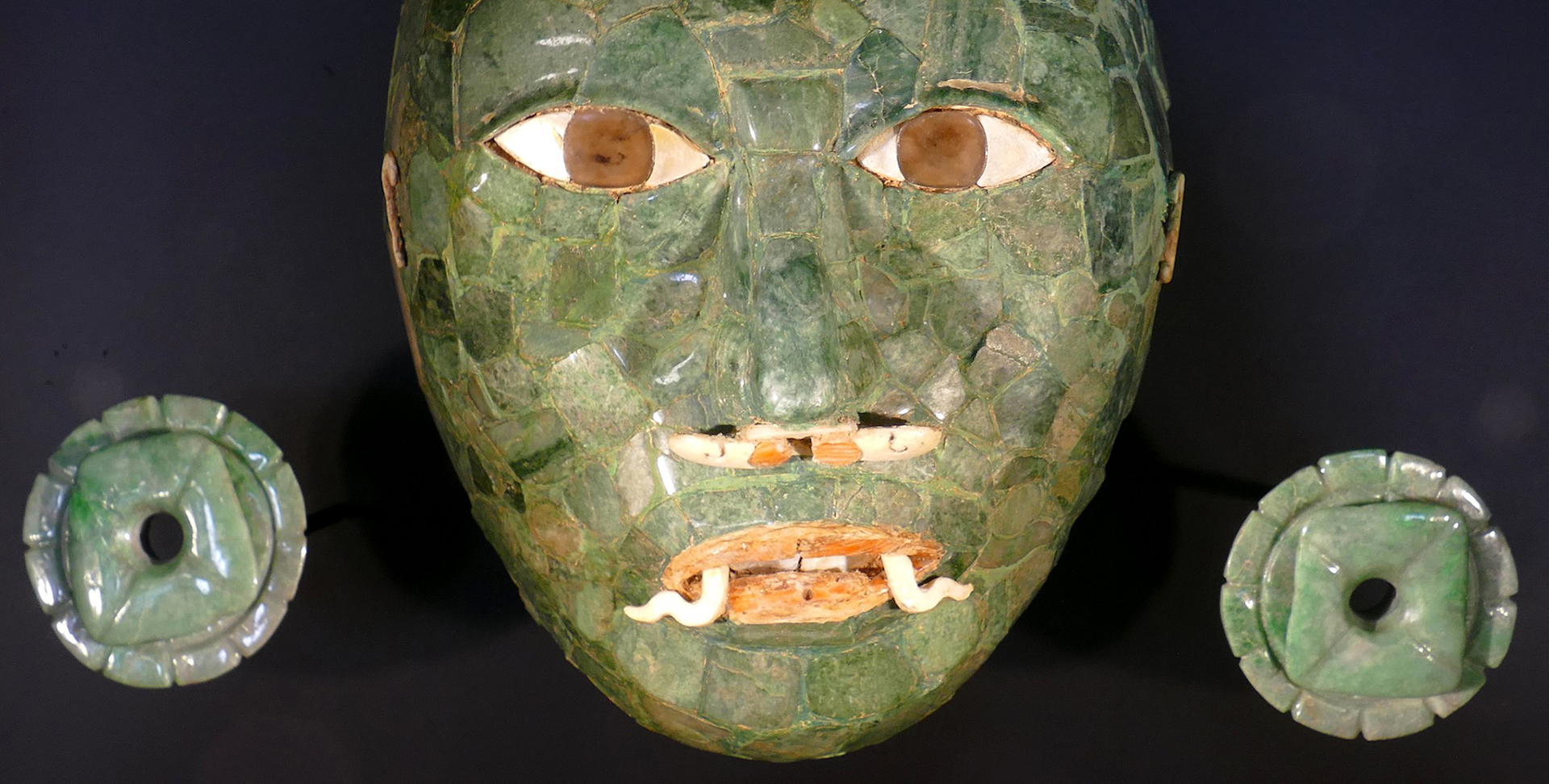 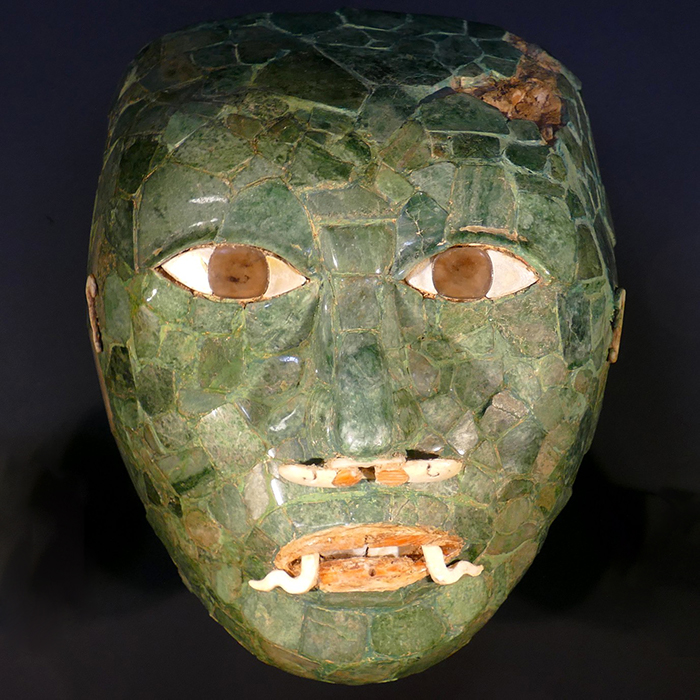 There are so many legends about the Mayas because they are one of the most famous civilisations on the American continent, with their roots in “Mesoamerica”, the central region in the continent, although they are not the only ones to have settled there!

Here are a few of the most significant cultures in Mesoamerica. 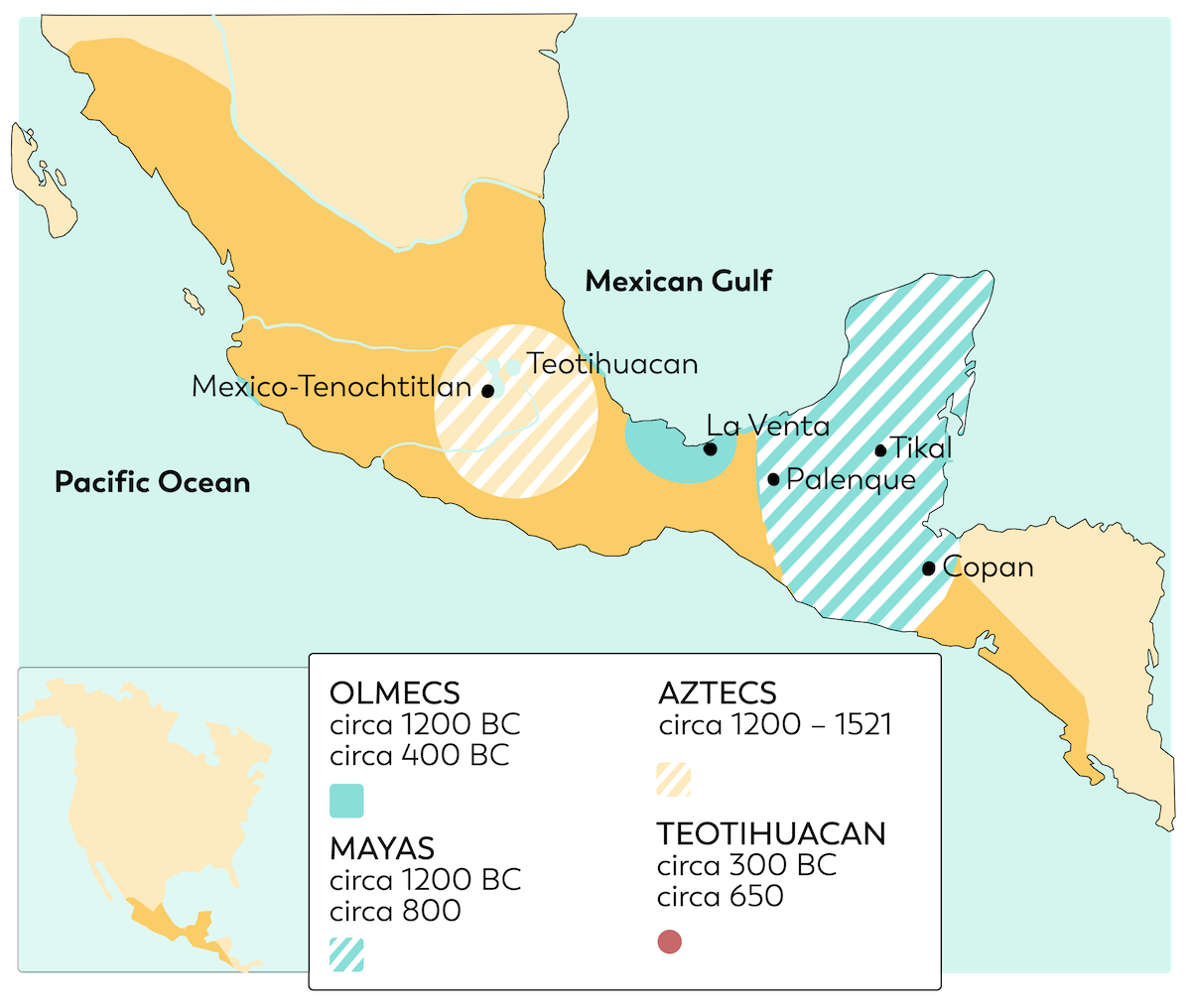 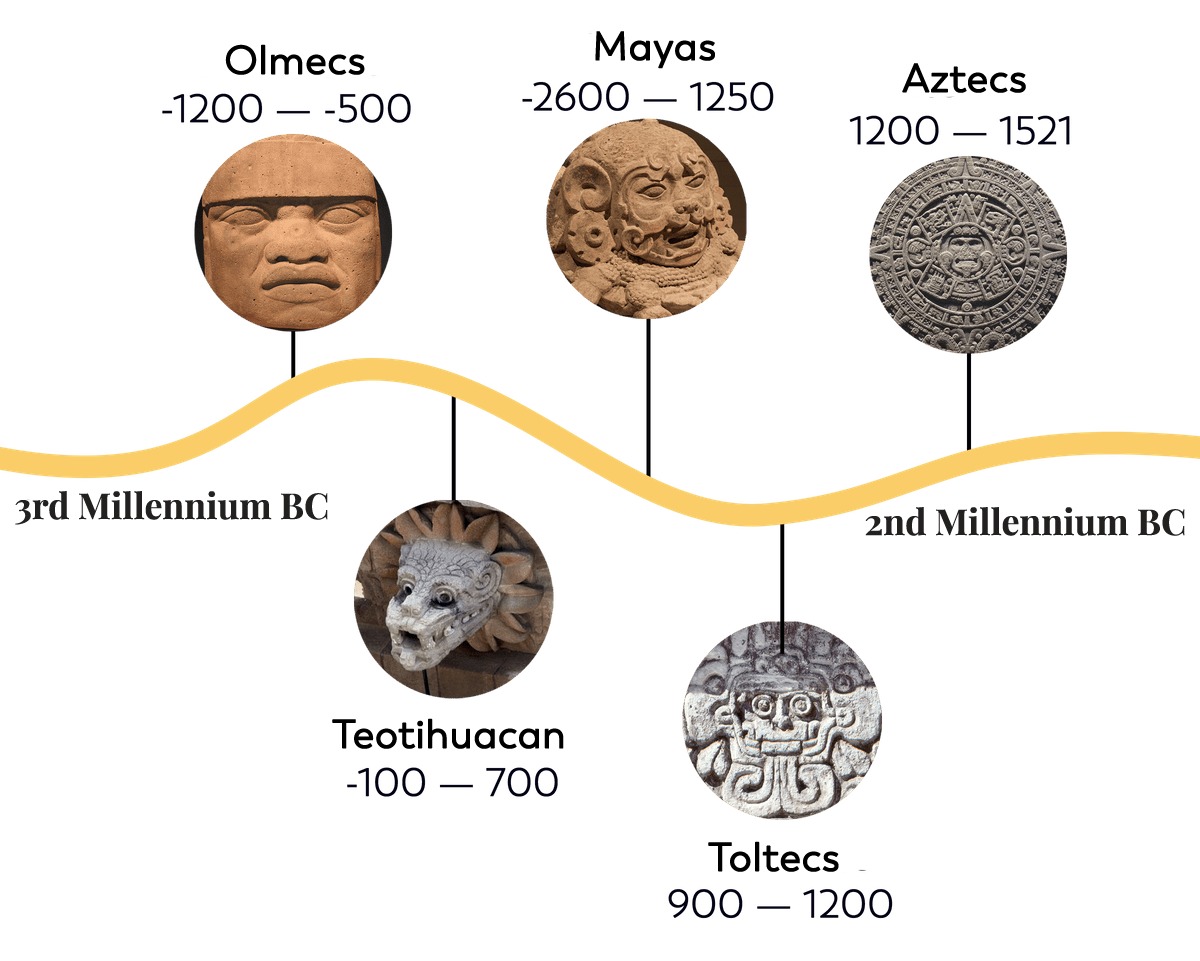 The Mayas are one of the central American civilisations in a region therefore known as Mesoamerica.

The Mayas were far from being the first settlers in this area of the world. The most ancient people were the Olmecs. They were so ancient that they are what may be called a “mother civilisation”. This means that their world-vision influenced all the succeeding cultures, almost as though they had given them birth!

Amongst the Olmec remains, some of them have come a long way. 17 of these giant heads, some of them measuring 3 metres high, have been found! They probably represented leaders, but according to other theories, they are portraits of “ball game players”. We’ll explain that for you straightaway. 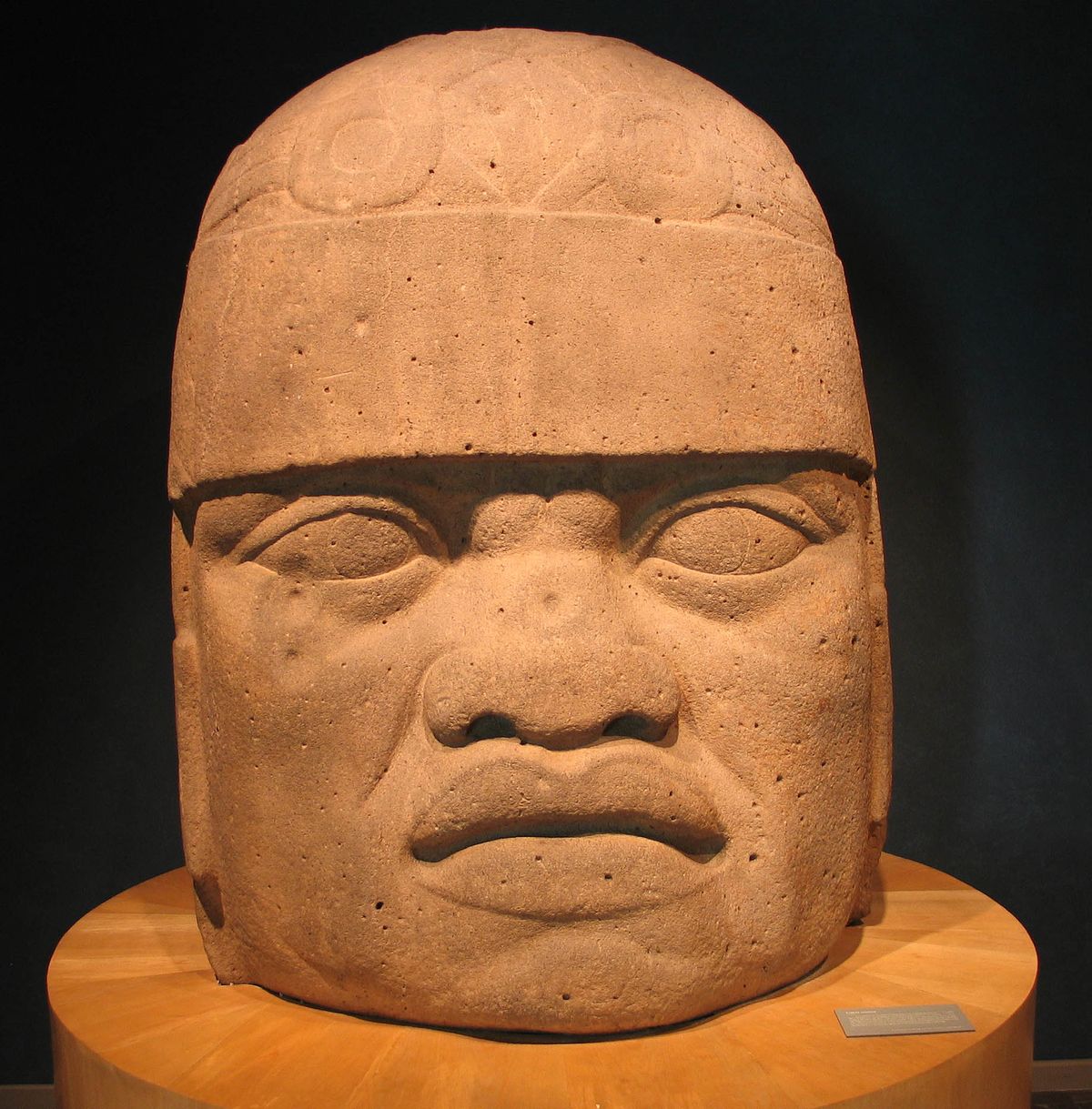 The Olmecs are the “mother civilisation” of Mesoamerica: their culture filtered through into all the civilisations that succeeded them. 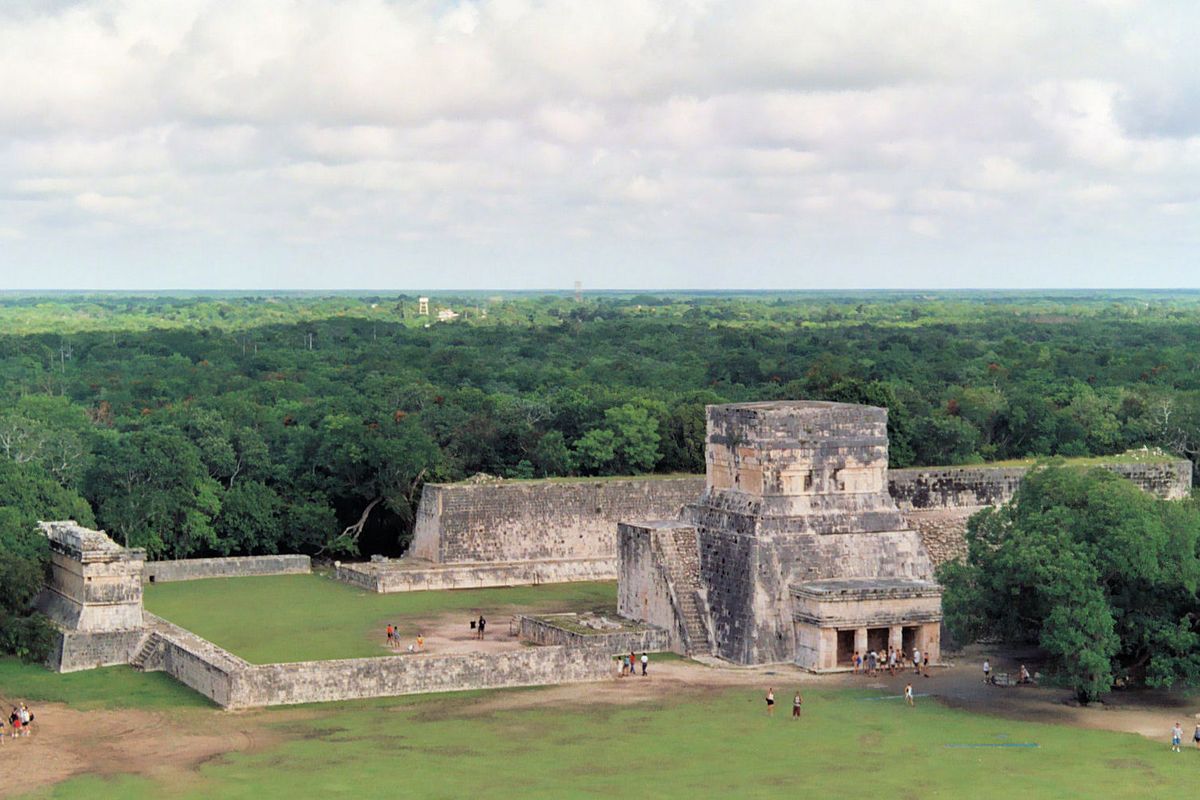 The “ball game” is said to have been invented by the Olmecs, but it can be found in all Mesoamerican civilisations.

Far from being just a game, this sport is first and foremost sacred. This is why the players are considered so important, (maybe!) to the point of making giant portrait sculptures of them.

During a ball game, two teams played with a rubber ball against each other. It may have seemed amusing, but there was nothing innocent about it, which was evident from a cursory glance at the sculpted decorations around the maya Chichen Itza ground.

The game ended with… a human sacrifice! On this relief, the victor holds the decapitated head of the loser. 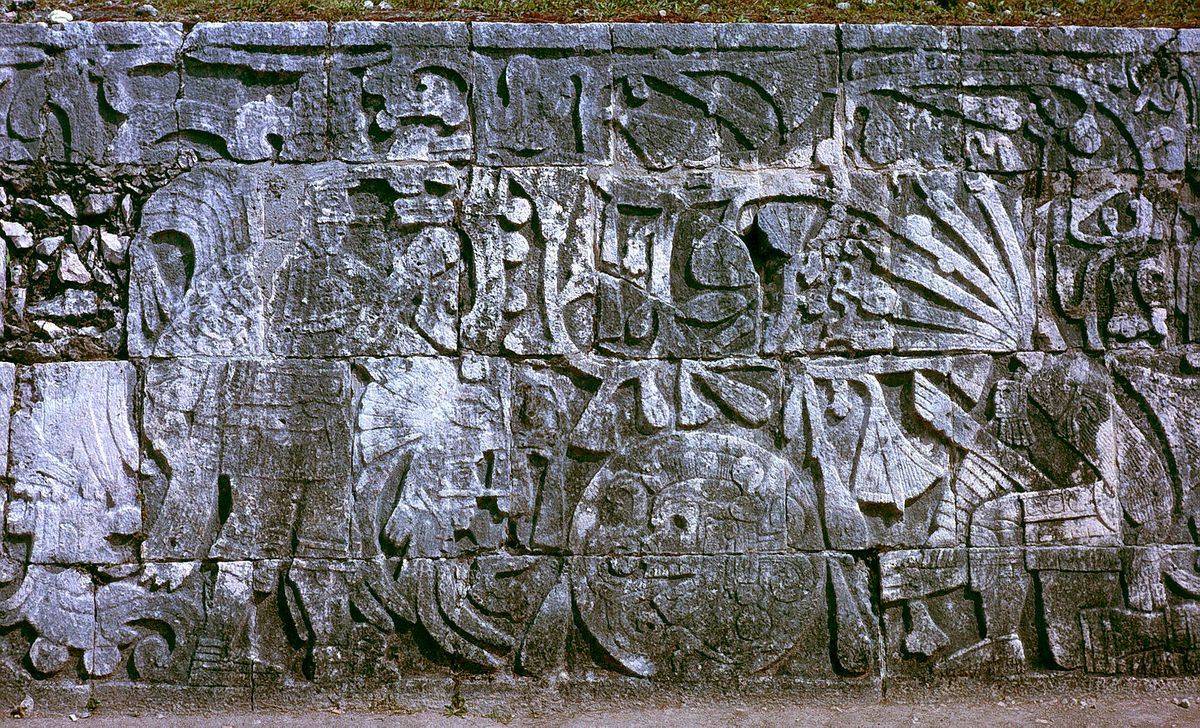 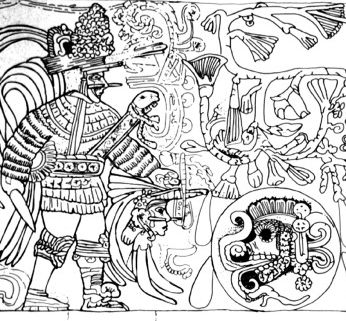 Relief on the façade of the Gran Juego de Pelota (detailed drawing),
Chichen Itza
In a nutshell

The ball game is a religious practice found throughout Mesoamerica. 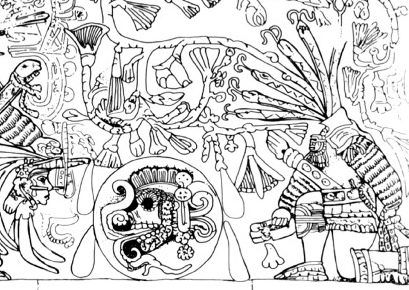 On the right, snakes are coming out of the sacrificed player
Relief on the façade of the Gran Juego de Pelota (detail), around 900, Chichen Itza

Plants, snakes and flowers… All these beautiful things sprang from the neck of the person beheaded for a very good reason: the Mayas believed that death opened the way to recreate life.

We find this symbolism in the tombs of members of the Maya elite. Some important characters are buried with jade masks. This stone’s green colour symbolises the fertility of nature, water and therefore of life, ideal for these death masks that were supposed to give access to eternity! 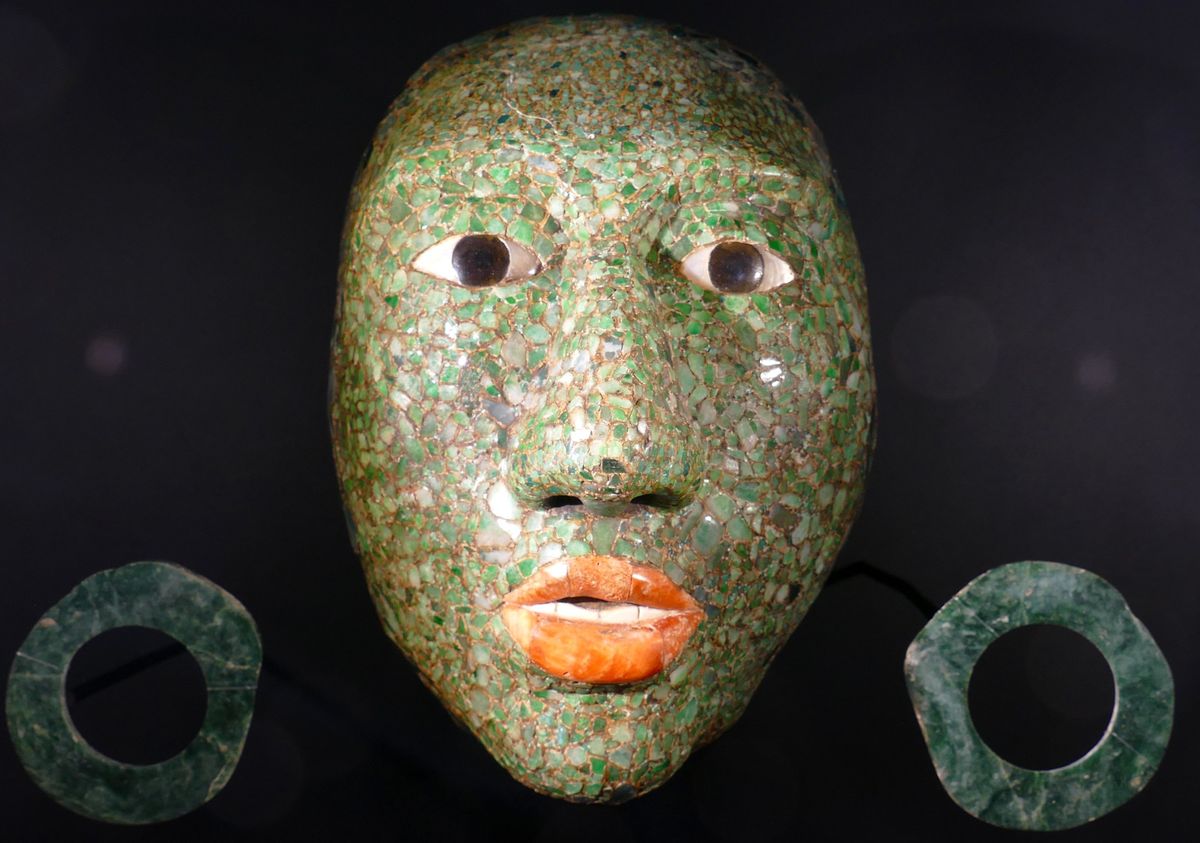 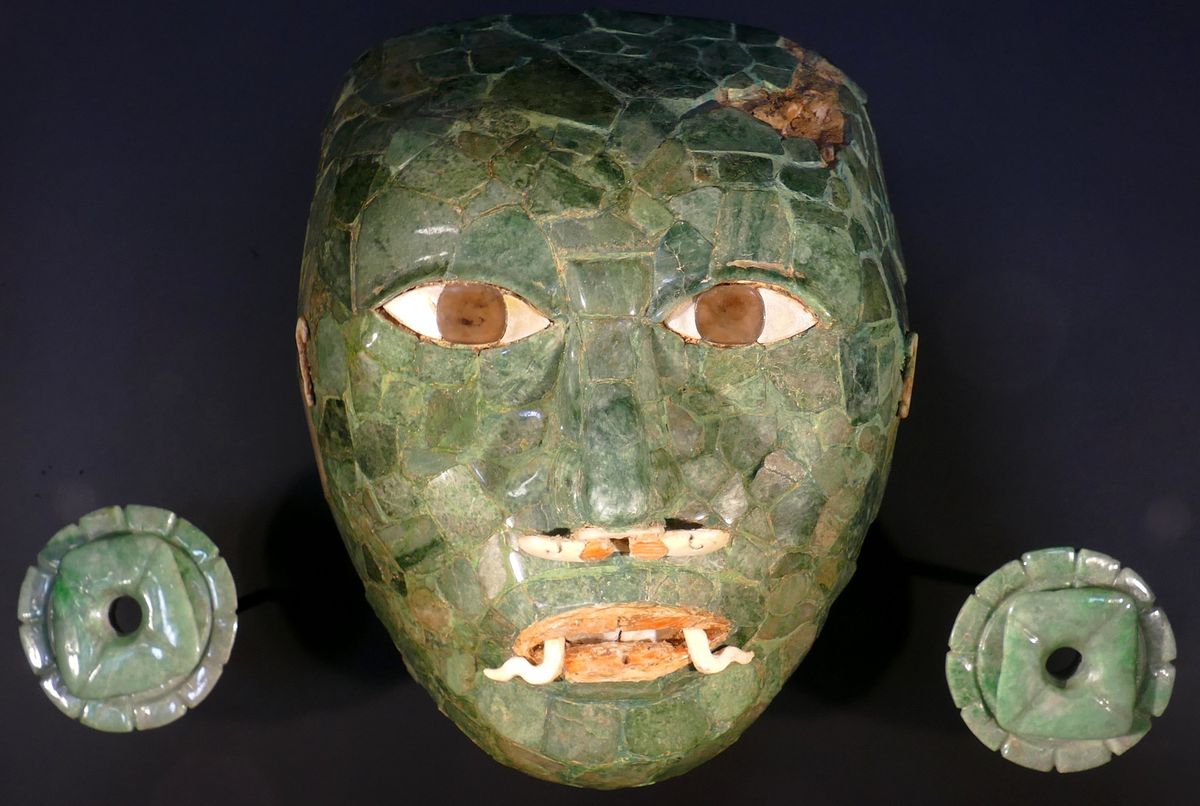 For the Mayas, death led to the recreation of life: that is why death masks portrayed the fertility of nature. 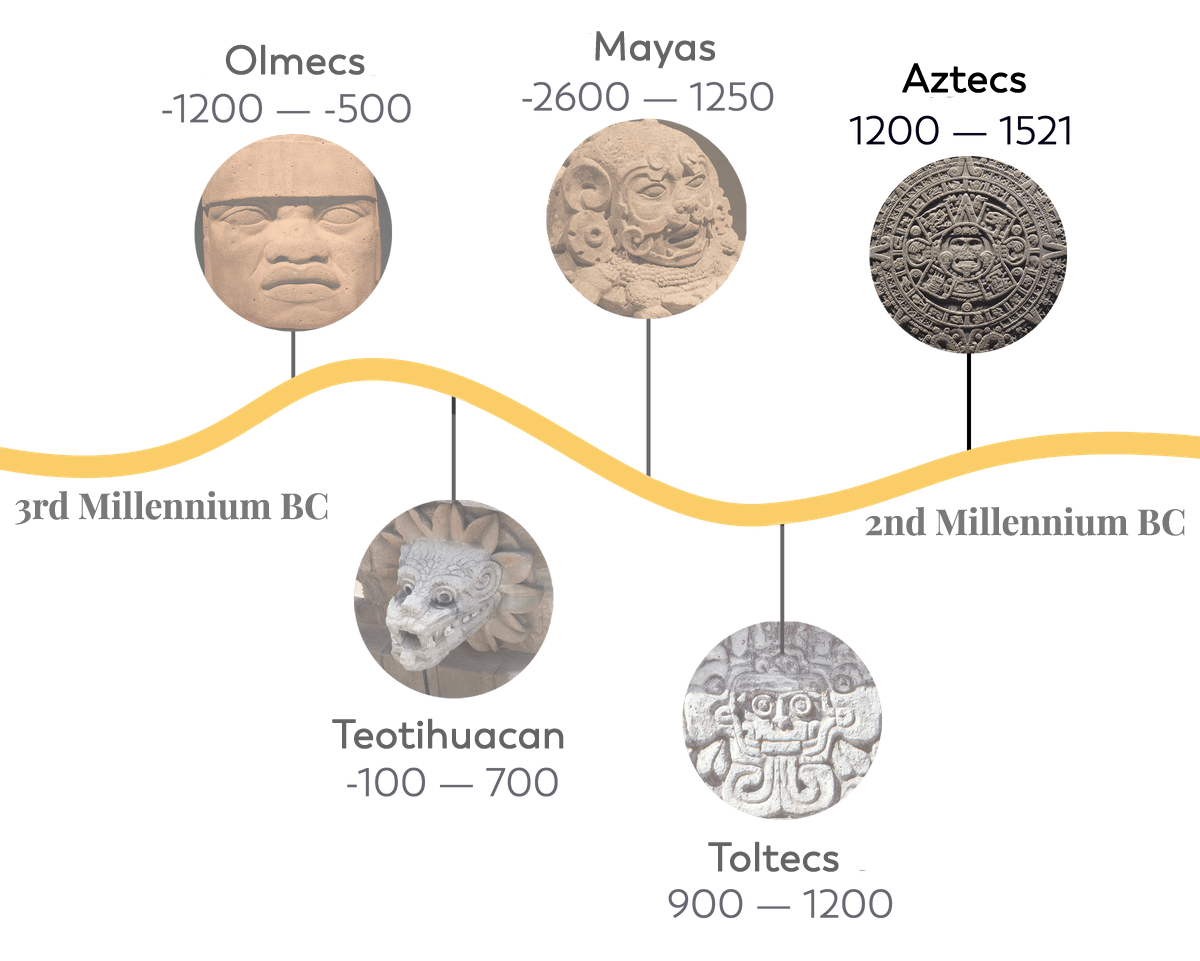 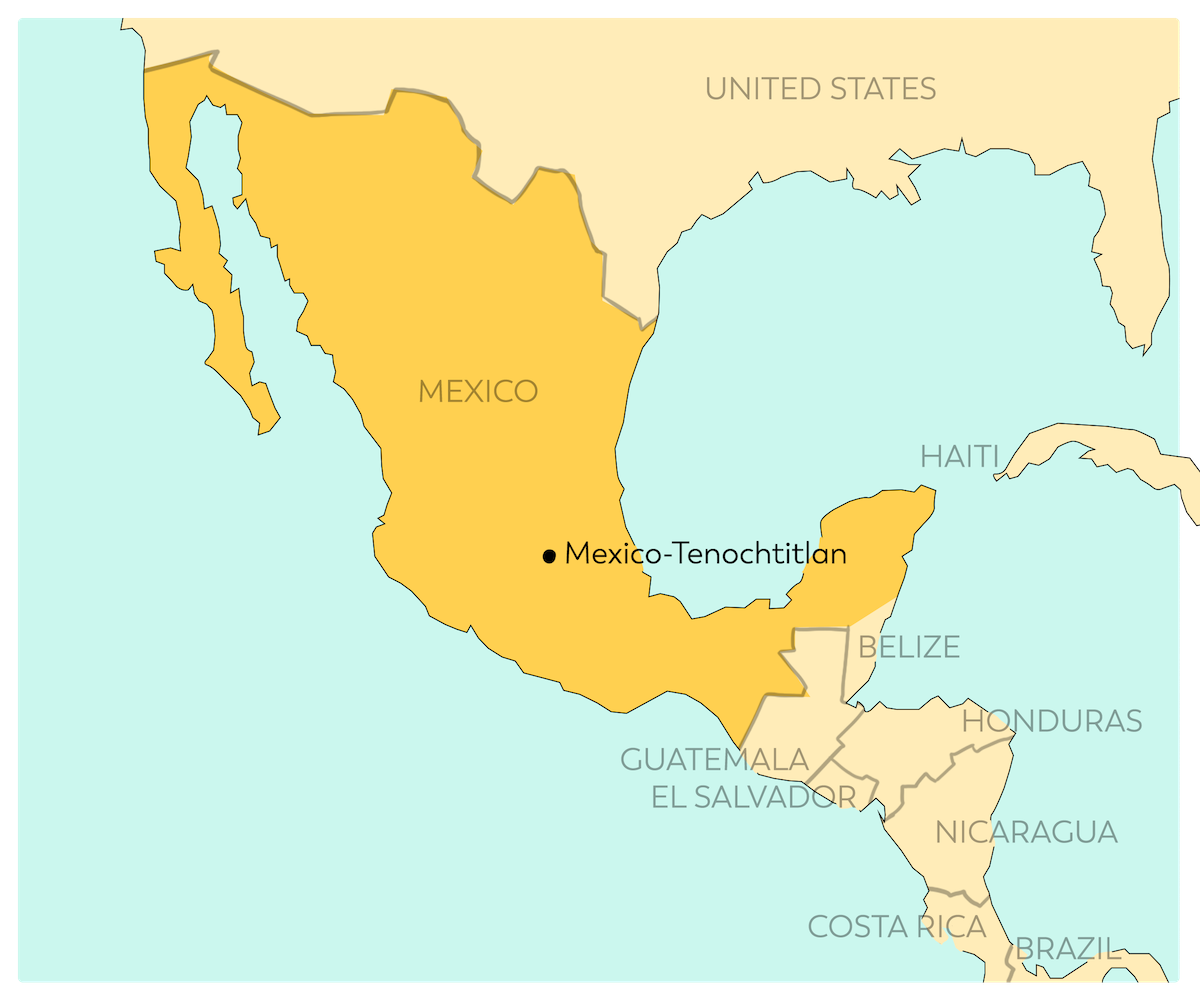 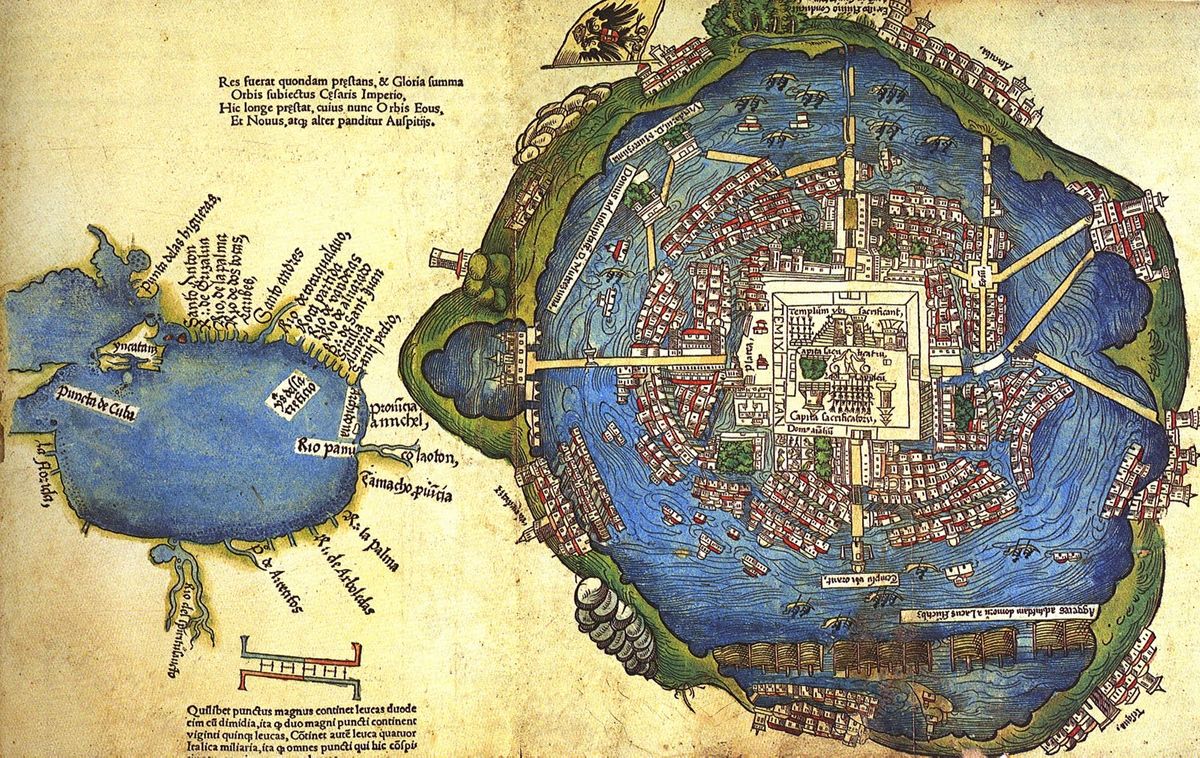 Now it’s time to visit the Aztecs. Much later than the Mayas, they set up their capital city, Tenochtitlan, on the site where Mexico City now stands, and legend would have it that they did not choose it by chance.

A deity is said to have shown them the place where they were to establish their civilization, indicating that their promised land would be located where they saw an eagle perched on a cactus with a snake in its beak, a symbol still found today on the Mexican flag. 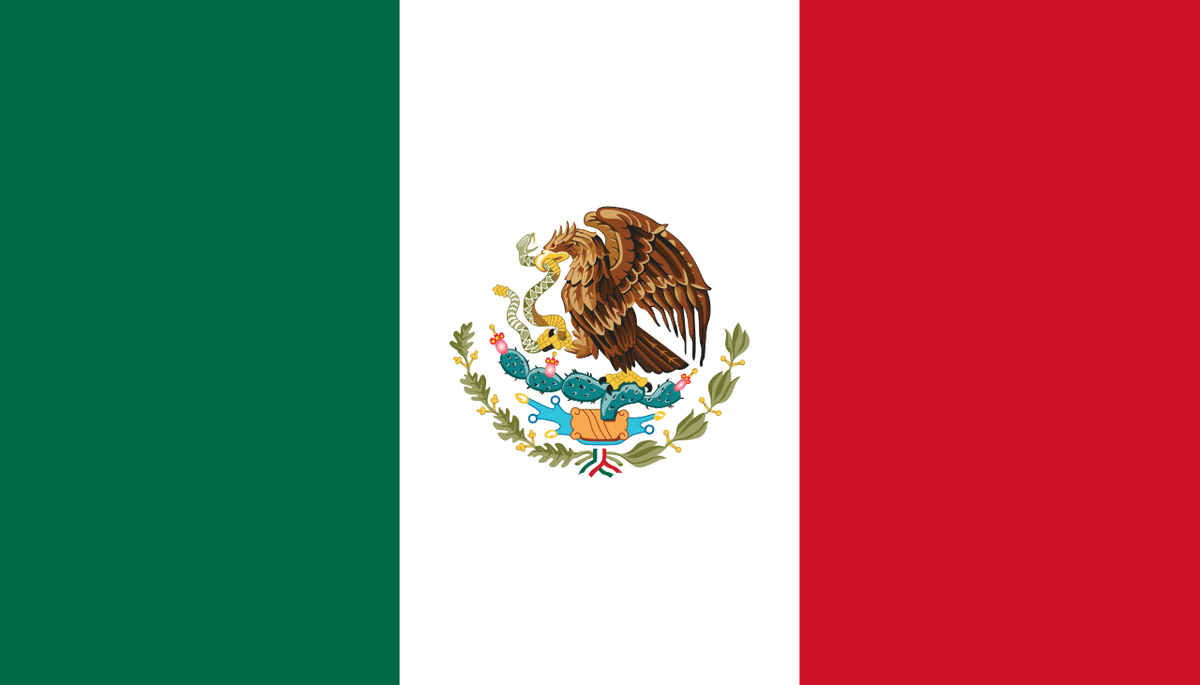 Mexican flag
In a nutshell

The Aztecs, another great Mesoamerican civilisation, built their capital city in Tenochtitlan, which is now Mexico.

This deity, who guided the Aztecs, answered to the easy name Huitzilopchtli, who, along with Quetzalcóatl and Tlaloc, figured amongst the divinities who were the most revered by this people. 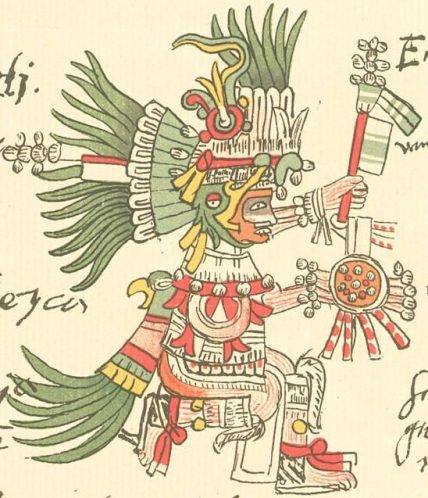 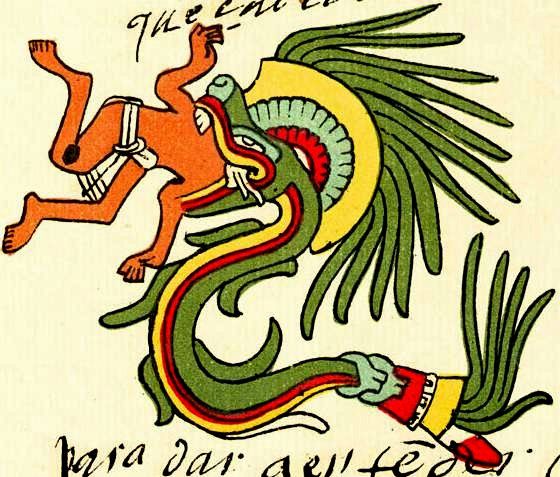 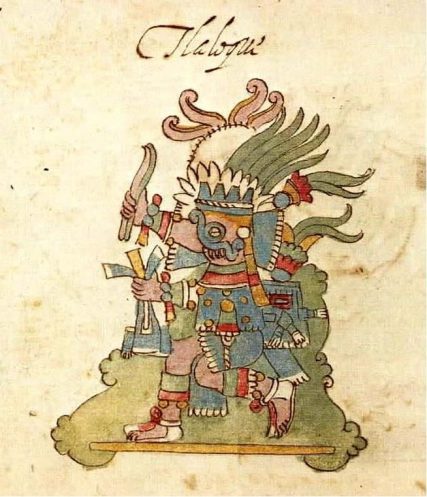 Distinctive Sign: Usually takes the form of a feathered serpent or an old man with a beard

Profession : God of religion (as such), writing and civilisation

Key fact:Quetzalcoatl enables human beings to eat by offering them maize and fire

Distinctive Sign: Tlaloc is recognisable because of his round eyes and fangs

Profession : God of water and the rain

Key fact:Keeps a special place in paradise for humans who die by drowning

The deities most revered by the Aztecs were named Huitzilopochtli, Quetzalcóatl and Tlaloc. 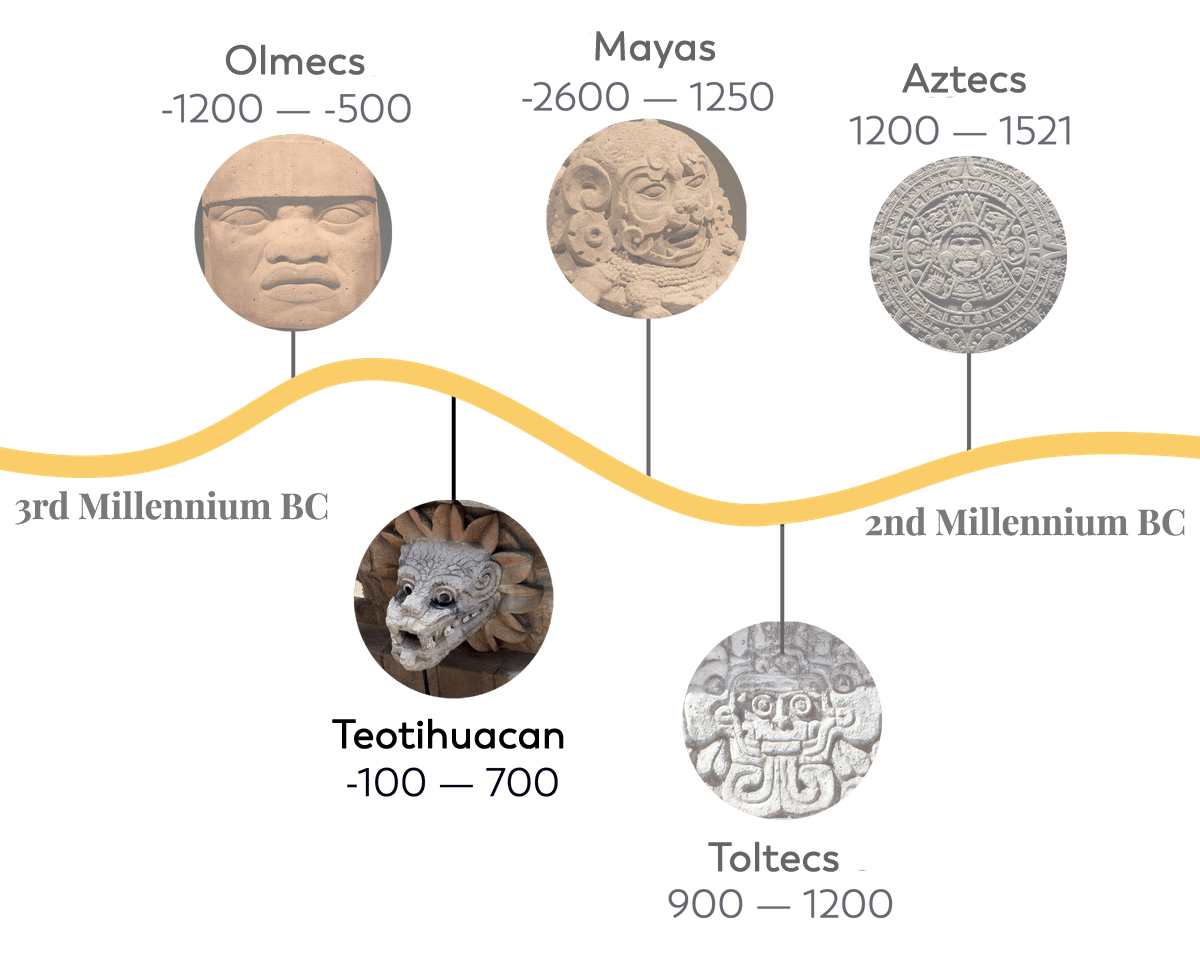 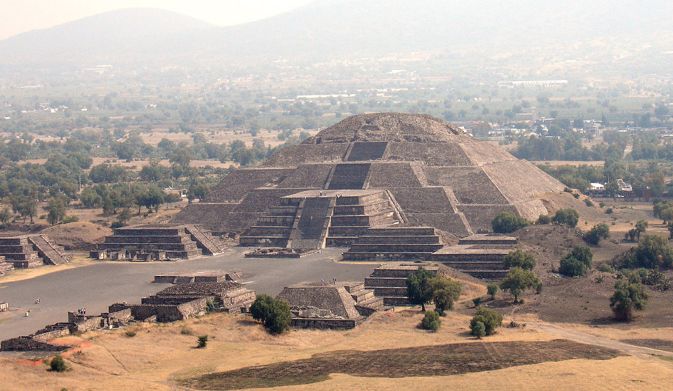 Although Huitzilopochtli was one of the Aztecs’ own gods, Quetzalcóatl and Tlaloc were revered by other peoples in Mesoamerica. Long before the Aztecs, they were already in Teotihuacan, a central Mexican city with its own culture.

One of the most famous of Teotihuacan’s pyramids was nicknamed the “Temple of Quetzalcóatl”. It should be said that the feathered snake was represented everywhere on its outside walls, but it was not alone: Tlaloc was also there, because this temple was dedicated to water and rainfall, an essential precaution in a region where showers are rare and violent. 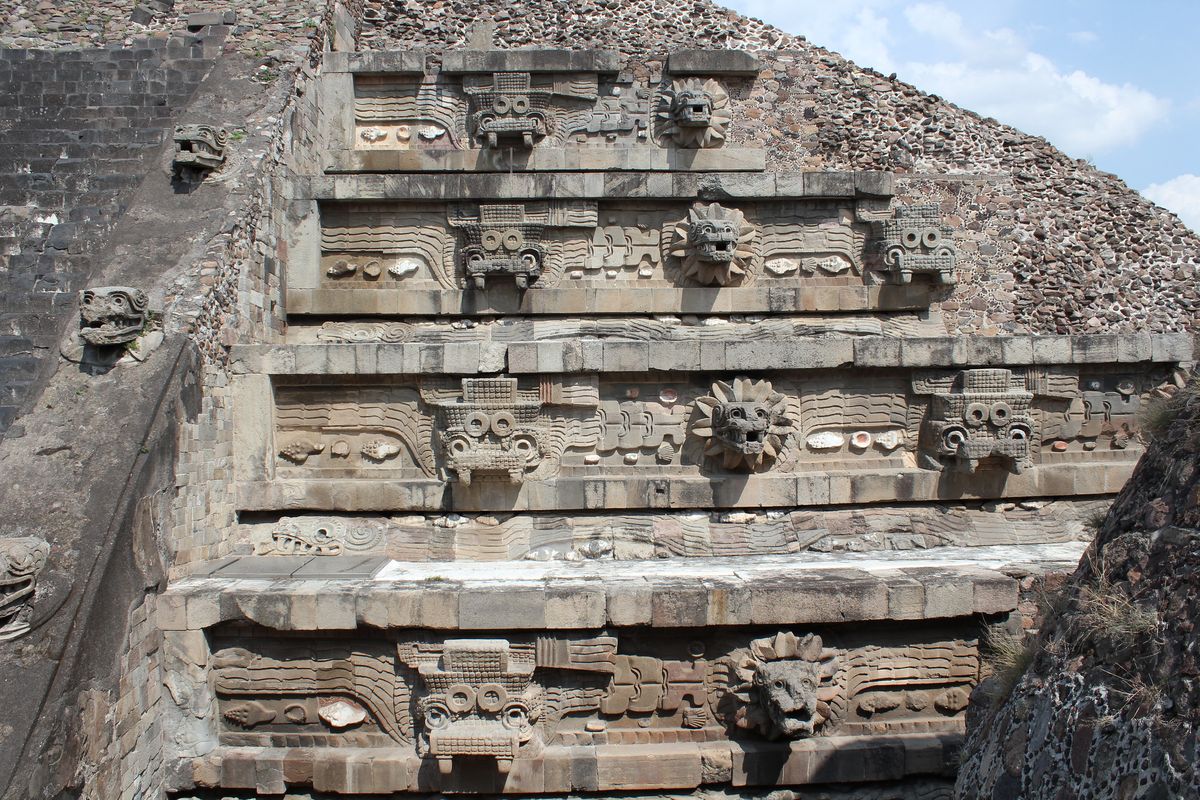 Temple of the Feathered Serpent
around 150, Teotihuacan Photo: Arian Zwegers, CC BY 2.0 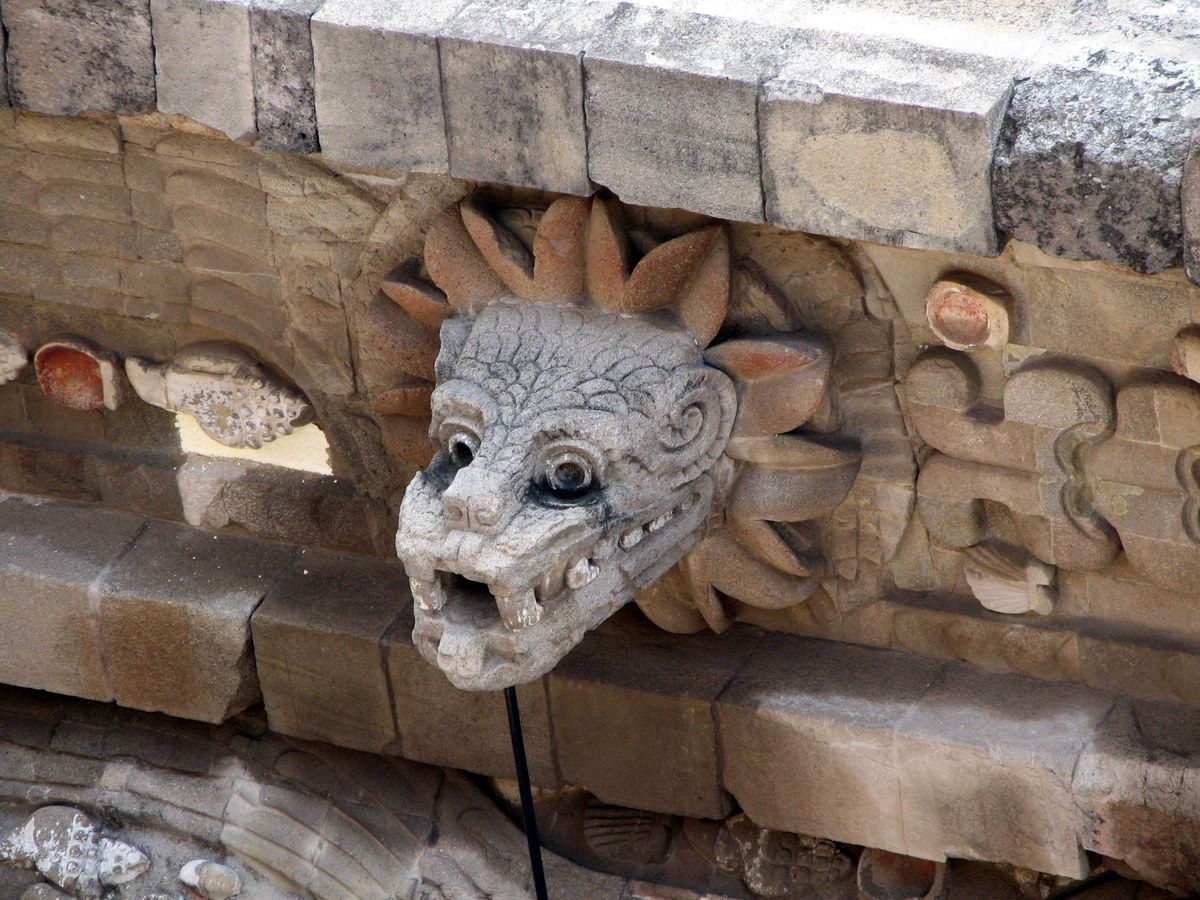 Head bolts of the Feathered Serpent Quetzalcoatl,
around 150, Teotihuacan Photo: James, CC BY 2.5 ES
In a nutshell

The Teotihuacan civilisation is particularly well known for its pyramid, known as the “Temple of Quetzalcóatl”.